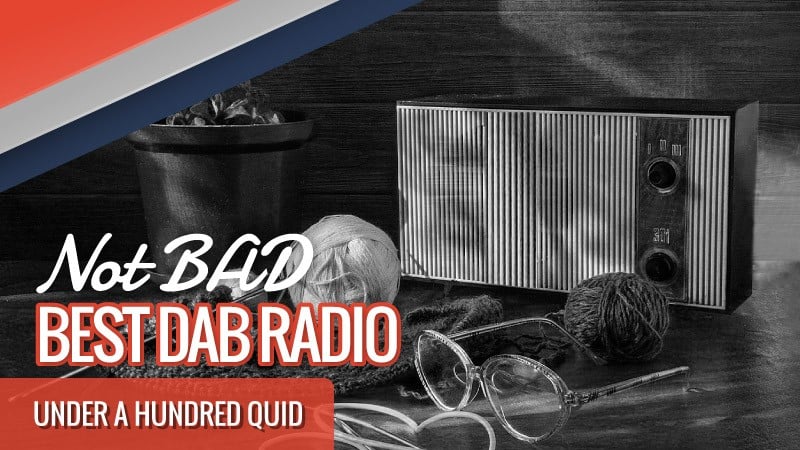 The digital radio, it serves as your escape into stories and music, and it can be the best way to end a stressful day. Whilst portable music players and music apps on our phones may have taken over, there is still a place for this piece of kit in your home.

However, it can be hard to pick one considering how many there are on the market, and that’s where we step in to help. What is the best DAB radio under £100, and more importantly, what is the best radio for you? In this guide, we help you to discover the answer.

What is a DAB Digital Radio?

Digital Radios come with a plethora of different functions. In the beginning, Radios where just radios, you could simply tune in to the closest Radio station and listen to your heart's content.

But with the advent of digital radio, you can now listen to stations further afield, as well as having a multitude of other functions. But what is a DAB Radio? DAB stands for Digital Audio Broadcasting, also known as a high-definition radio.

Unlike picking up simple AM or FM signals, they pick up digital radio signals, allowing radios to broadcast further afield and attract more listeners thanks to the digital age.

These Radios changed how people listened to the Radio and gave more room for stations to come forward and attract audiences from further afield. As technology has advanced, so have these radios, and whilst Mobile Phones and Tablets may have tried to push them out of the way, there is still plenty of room for these Radios.

Whilst people may think that DAB Radios are just for inside your house, technology has allowed them to become more accessible. You can now buy portable digital Radios as well as Radios that can connect to your car, allowing you to access your favourite Radio station whilst you are on the move.

Now all that’s left is for you to choose the perfect model for you. Take a look at our DAB Radio reviews below. 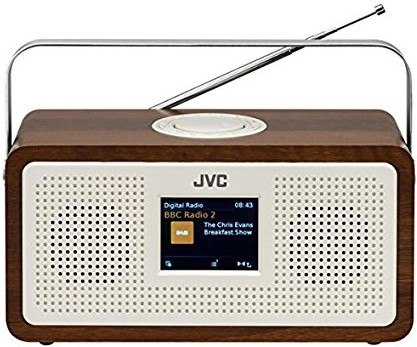 This classically designed Radio is a simple and easy to use and gives you everything you would need from a DAB Radio.

Have a look at the reviews below to see if this is the best radio for you and your needs.

The Good
This nifty radio can be used through the mains or through a battery, with up to ten hours of battery life, making it great to pack away and take with you.

Its beautiful design also gives it a vintage look but still has all the modern features you would want.

In fact, the simple design allows it fit in with any décor, and it's really easy to tune and use.

The LED display also means that you aren’t left guessing which channel you are on, but it’s not so bright that it will keep you up all night. It also has an alarm clock built into it, so you can rest assured that you will be up for work every morning.

The Not So Good
Whilst the simplicity of this radio makes it easy to use, you can't listen to other music through your phone or another electronic device.

Our View
This lovely radio is everything you would want; its chic and simple design will fit into any house. We love this little radio for its simplicity, but as far as breaking modern barriers it doesn’t really hit the mark, but if a simple radio is all you want then this is the perfect radio for you.

Plus, it comes at a reasonable price, and has all of the basic features that you need to kick back and relax. 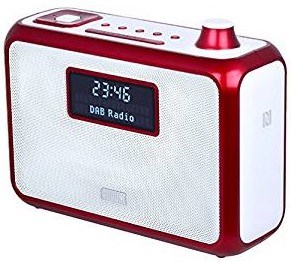 This modern little Radio gives you everything you would want in a DAB radio, as well as providing you with all the modern tricks and traits that allow you to use your radio with all of the latest tech. Have a look below and see if it is right for you.

The Good
This funky DAB radio has a really modern and stylish design, allowing it to fit in perfectly with any home and your chosen décor.

With FM tuning included, you will always have access to the radio stations that you love the most, so you can take the time to enjoy your favourite tunes and radio presenters at any time.

The alarm clock function allows you to be woken up by your favourite Radio station every morning, and there is no better way to be brought out of sleep, is there?

It is Bluetooth enabled, allowing you to connect your other pieces of technology to it. Plus, it is battery or mains powered, making it more portable than it looks.

The Not So Good
Some customers found that it had a few too many buttons, which may make it difficult to use if you are not technically minded.

Our View
This lovely and affordable radio gives you everything you could possibly want, allowing you to use it to wake you up in the morning, as well as streaming your own music through your phone.

It is true that it might be a little technical for some customers, but other than that, there is little that is negative about this small and affordable radio.

Q: When playing back from SD card, does it remember where you got to, if you switch off and back on?

A: Unfortunately not, it seems to start from the beginning of the last track you were listening to.

This truly transportable DAB radio for your car is perfect for long journeys. It allows you to listen to your favourite radio stations no matter how far you are travelling.

So, if you need a road trip companion, take a peek at the reviews below.

The Good
This stylish radio comes in black, so it should slot in nicely with the overall design of your car. It can be used with your own car radio to change the analogue signal to a digital signal, allowing you to listen to FM channels when you want to – so you never lose the stations you love the most.

It connects easily to your cars USB charge point as well, so there is no need to worry about batteries. This means that even the longest road trips will be accompanied by music and your favourite DJ. Plus, it even connects with your phone to so that you can take phone calls hands-free.

The Not So Good
There have been no issues with this model of DAB car radio so far.

Our View
This affordable DAB radio for your car can make any trip pass with ease. It will allow you to listen to any digital radios signal whilst travelling, meaning you are less likely to have to fiddle with your radio whilst driving.

Whilst this fantastic piece of kit will make any driving experience more enjoyable, it is important to remember that even small distractions can cause an accident, so setting this up before you drive is important.

Here are some other DAB Digital Radio models for you to look at, in case the ones listed above did not suit your needs. 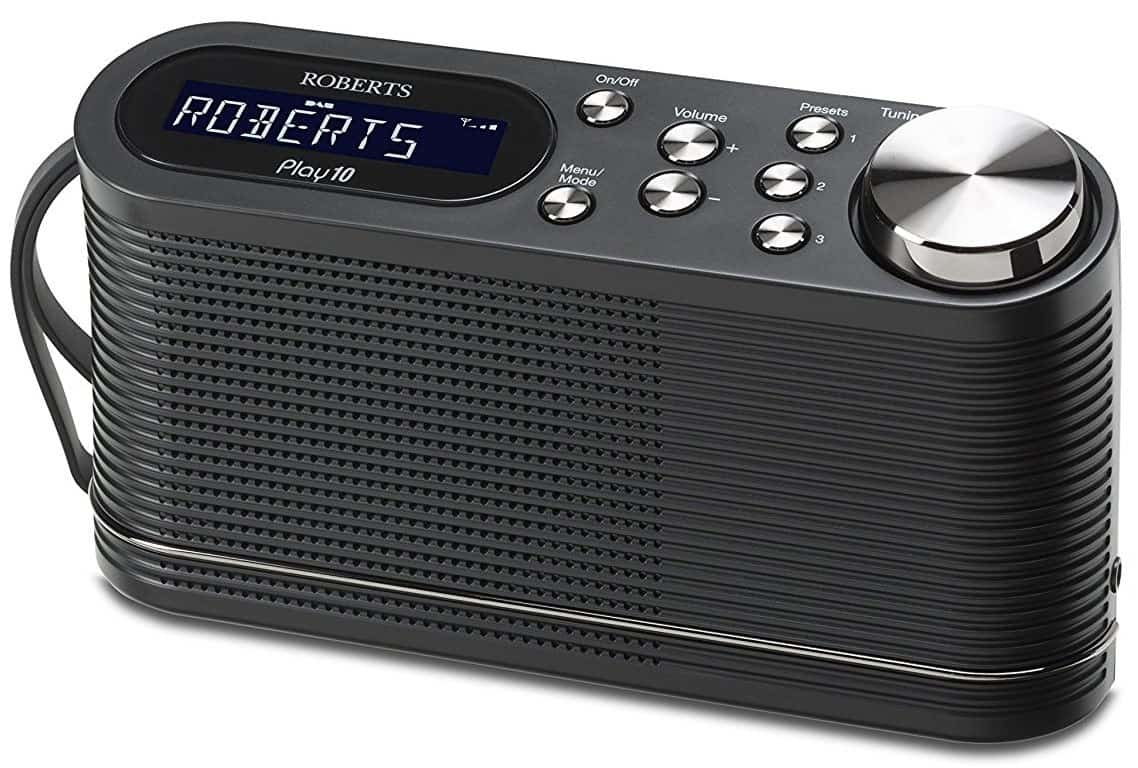 This simple radio is perfect for those who don't like fuss. It is small and portable allowing you to transport it wherever it needs to be.

It has an LED display that lets you see the radio station you are looking for, as well as having a manual and auto turning systems, making it simple to tune. It's easy to use and super affordable. 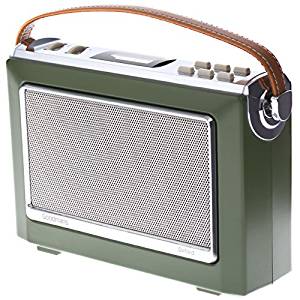 This vintage radio provides classic and modern technology in one radio system, and it is sure to look absolutely fantastic wherever you put it.

It's portable and easy to use, and while it has a vintage look that makes it seem low-tech, you don’t want to underestimate it.

After all, this model still has some more modern features, such as a display screen, that can make tuning the radio easier. Plus, it comes at a pretty fantastic price that can fit into just about any budget with ease.

Finding a digital radio that looks good and does the job might have been a difficult and daunting challenge, but the range of radios we have found for you provide everything you could ever want.

They are modern and stylish and allow you to listen to the radio stations you love, as well as using them in your everyday life. If we had to pick just one of these fantastic models as the best DAB radio under £100, it would have to be the DAB+ radio with Bluetooth, simply because it gives you everything you could want in a modern radio, whilst still keeping that retro feel.

What did you think of our DAB Radio selection? Are there any that you would have added? We love hearing from you, so feel free to leave us a message in the comments below.